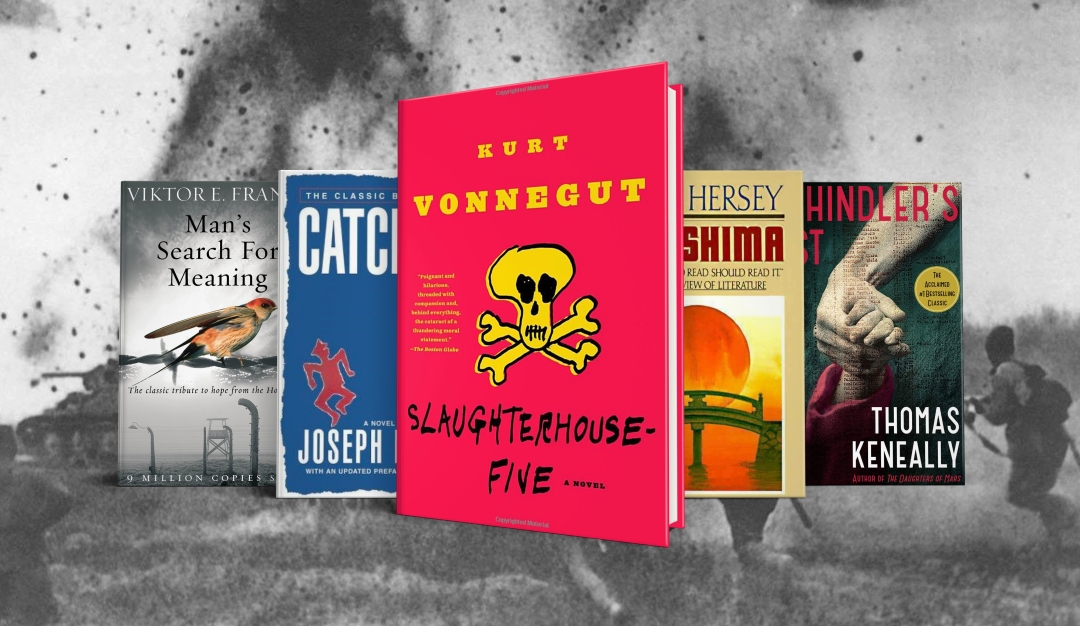 Five Books About War You Should Read

“What a cruel thing war is… to fill our hearts with hatred instead of love for our neighbors.”— Robert E. Lee

Recently, we told you that Prabook was about to launch a new campaign dedicated to World War II. And we did it! The thing is that we want to honor the memory of its warriors by telling their stories and sharing them with millions of other people worldwide. We will be grateful if you join this campaign. If your parents, grandparents or just some acquaintances of yours took part in WWII, please, share their stories right on our website. Let’s keep their memories alive!

And today we’ve prepared a list of amazing, shocking, heartbreaking, and gripping books about war. All of them definitely deserve your attention.

August 6, 1945, is one of the saddest and darkest days in the history of not only Japan but all countries. On this day, a Japanese city Hiroshima was destroyed by the first atom bomb ever dropped on a city. This book tells what happened on that day. Based on the memories of survivors, this John Hersey‘s journalistic masterpiece has become a classic “that stirs the conscience of humanity” (The New York Times).

Almost four decades after the original publication of this widely-known book, the author returned to Hiroshima. There he searched for the people whose stories he had told.  This account of what he discovered about them is now the expressive and affecting final chapter of the book.

Is it possible to write a funny book about war? Of course! Just read Catch-22, which is considered one of the most hilarious books ever written.

Yossarian, an incomparable, malingering bombardier, is our main hero. He is surprisingly inventive in his attempts to save his skin from war. No wonder. Thousands of people he hasn’t even met are trying to kill him! However, he has a problem, and the name of this problem is Colonel Cathcart, who keeps raising the number of missions the men must fly to complete their service.

Yet if Yossarian tries to excuse himself from the dangerous missions that he is committed to flying, he is trapped by the Great Loyalty Oath Crusade, the hilariously sinister bureaucratic rule from which the book takes its title. According to this rule, a man is considered insane if he willingly continues to fly perilous combat missions, but if he makes the necessary formal request for exemption from such missions, the act of making the request shows that he is sane and therefore cannot be released.

Slaughterhouse-Five, or The Children’s Crusade by Kurt Vonnegut

Slaughterhouse-Five is one of the world’s great antiwar books. It combines historical, psychological, sociological, and science-fiction elements. Unlike novels based on traditional forms, Kurt Vonnegut‘s novel does not fit a habitual model that consists of a plot, a character conflict, and a climax. Instead, the author offers us a multifaceted and multidimensional view of fantasy and rock-hard reality.

For Kurt Vonnegut, the form for Slaughterhouse-Five grew out of events arising from his World War II experiences, centering on the infamous firebombing of Dresden. Because the author views the Dresden bombing as senseless, everything Vonnegut writes describing the bombing has to feel senseless as well. Billy Pilgrim’s odyssey through time reflects the mysterious journey of our own fragmented lives as we always seek meaning in what we fear most.

Psychiatrist Viktor Frankl’s life is one of the most tragic and at the same time one of the most inspiring stories of all times. The thing is that between 1942 and 1945 he labored in four different camps, including Auschwitz, while his parents, brother, and pregnant wife perished. He lost everyone he loved, he lost his purpose. But Frankl managed to go through all the adversity and get out a completely different person.

Based on his own experience and the experiences of others he treated later in his practice, Viktor Frankl argues that we cannot avoid suffering but we can choose how to deal with it, find meaning in it, and move forward with a renewed purpose. His theory is known as logotherapy, from the Greek word logos (“meaning”). According to it, our primary drive in life is not pleasure, as Freud claimed, but the discovery and search for what we personally find meaningful.

This great volume proves that war can radically change a person. There are plenty of examples of cases when good people (at least, they were considered such people) betray their families and friends and took the side of their enemy to survive. At the same time, there were those who gave up their sloppy lifestyle and proved to everyone, first of all to themselves, that they are capable of more. And Oskar Schindler is among these people.

During the Second World War, a flamboyant German industrialist, Oskar Schindler, who was known as a womaniser, a heavy drinker and a bon viveur, grew into a living legend to the Jews of Cracow, as he became their savior. This man risked his life to protect Jews in Nazi-occupied Poland. He was tremendously transformed by the war and turned into a man with a mission, a compassionate angel of mercy.

We highly recommend you to read all of these books! You will find something valuable and enlightening in each of them.

If you want to learn more about any of these authors, please, visit prabook.com.